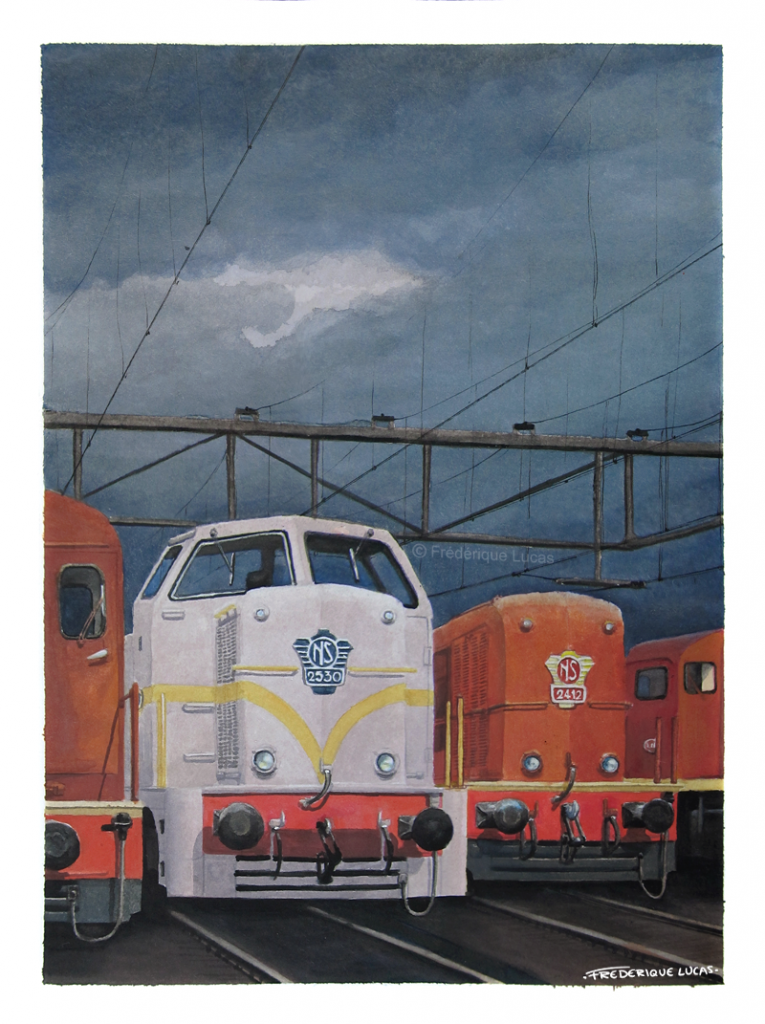 2530 is a loner amongst the Dutch Railway (NS) 2400 class. Sleek engines produced in France, she was the only one to bear a raised cab, improving visibility for the crew. And indeed, the 360 view is quite something to behold. Built as the last of the class in 1957, the improved design was meant to entice NS into ordering more locos. The story goes that the then-director’s wife was allowed to choose the engine’s colour. And so it happened that amongst the standard reddish brown, 2530 appeared in her lilac-gold-and-blue. Eventually she too had to conform to standards, but at the time she certainly made an impression.

Early 90′s the end came in sight. Many 2400′s were sent for scrap – but 50 saw a second lease of life in France. Bought by the SNCF, they helped build high speed lines in their country of birth. Eventually a couple were repatriated to the Netherlands for life on heritage railways. Our 2459 and 2412 are both such cases. 2530 was almost sold – all preparations made, the deal didn’t go through. One of our volunteers found her bound for the scrapyard while picking up some other goods. As the story goes, he paid for her right then and there in cash, got her out of the scrap train, coupled her onto ours and took her ‘home’. She’s been based at the VSM ever since, and after wearing a brown livery for many years we returned her to her rightful lilac colours in 2019. She’s in good shape, running regularly amongst her sisters – and so 2530′s story continues to this day.

Here she stands amongst fellow class 2400′s on a large loco yard, back in the good old days. Overhead lines already predict the rise of electric trains, but the diesels are still indispensable. Next to her stands 2412 – who knew they would later meet again in preservation. The sky behind them darkens with a storm rolling in. However the ‘thunder’ in the title refers not just to the weather: 2400′s can give a mighty roar when pulling up. Quite literally rolling thunder.